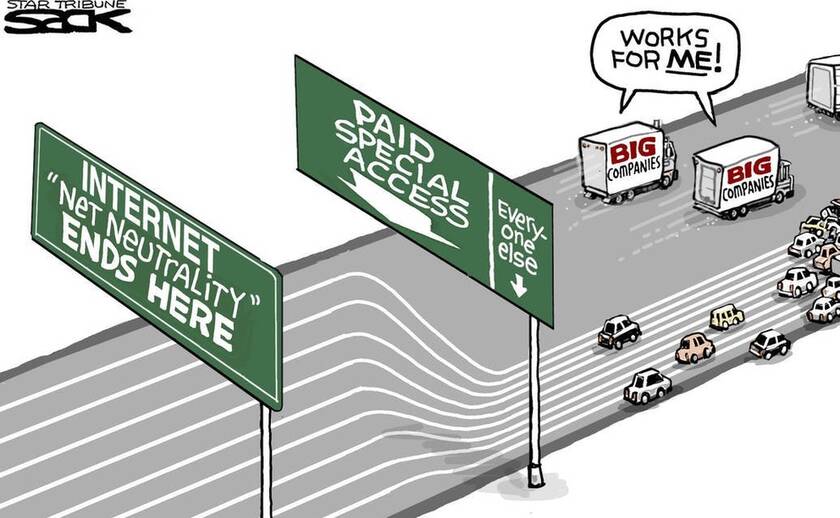 Net neutrality ensures that all data is treated equally during transmission - regardless of sender, receiver or content. For our customers, this equal treatment is the indispensable prerequisite for secure and fast data transfer.


If an Internet provider transports data from one video platform faster than another, this violates the principle of net neutrality. Due to a lack of legislation, the standards are defined differently narrowly today: For example, it is accepted that real-time services such as Internet telephony have priority. The so-called "zero rating" of mobile phone providers is also being discussed critically. For Sunrise customers, for example, there is no limit to what can be sent via Whatsapp, whereas the use of other messenger services such as Threema is not.

In the short term, such offers are an advantage for customers, but in the medium term they lead to consumers having less choice. Without net neutrality, companies will be forced by Internet providers to pay for faster data transmission. These costs will almost certainly be passed on to the consumer.

Threat to freedom of speech

he organisation Internet.org offers free Internet access in developing countries. However, this does not include the complete Internet offer, but primarily the services of Facebook. The example shows: Without the open Internet, freedom of expression and diversity of services are threatened. Some countries, such as India, have therefore banned Internet.org's services and enacted a law for net neutrality in mid-2018.

Parliamentary debate underway. Switzerland has not yet passed a law on net neutrality. In the autumn session of 2018, the National Council approved a provision on network neutrality during its deliberations on the revision of the Telecommunications Act. In the subsequent in-depth consultation, the Council of States was of the opinion that the regulation on the open Internet should be made more flexible. This is particularly true with regard to special services and future technologies, such as voice telephony via fourth-generation mobile telephony (VoLTE) and certain television services (IPTV). The issue is now again before the National Council

There are arguments against net neutrality as well. Due to the exponentially increasing amount of data, Internet and mobile providers are being forced to expand their infrastructure. These costs must be borne by the providers themselves. Contributions from companies for faster data transmission could generate revenues for increased network expansion. The providers therefore argue that the abolition of network neutrality does not automatically lead to discrimination – but to the fact that the services remain available at all.

Conclusion: We are committed to net neutrality

customers and us depend on a fast, neutral data network.  Financial resources should not be used to slow down data traffic. There is a danger that only the data of large and financially strong companies will be transferred quickly - SMEs in particular would be at a disadvantage.